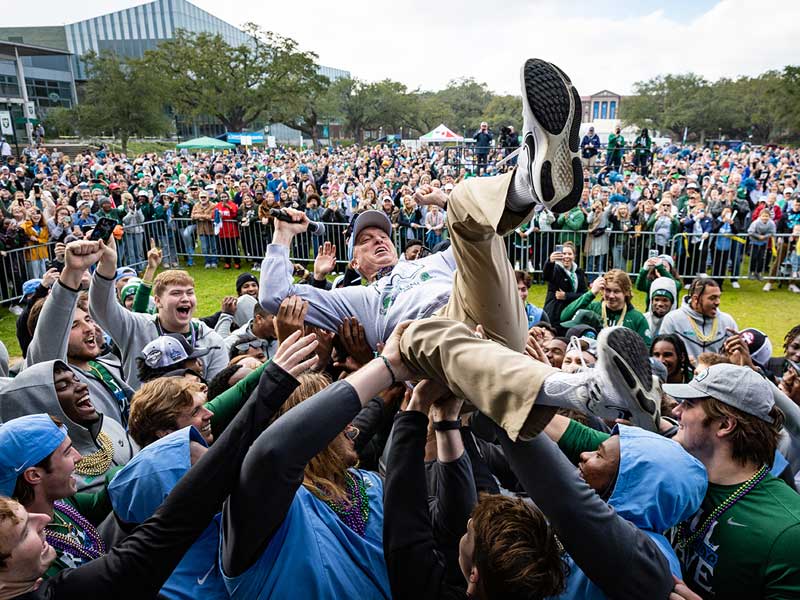 As soon as the Tulane football team began lining up for its victory parade through the uptown campus on Sunday, Jan. 22, the sun broke through the day’s gray clouds and light drizzle — just one more magical moment in a season of many magical moments.

An estimated 5,000 Tulane football fans and well-wishers turned out for “A Celebration Like No Other,” an event recognizing the extraordinary achievements of the Green Wave football team, which captured the AAC championship, as well as the Cotton Bowl Classic trophy, and ended the season ranked No. 9 in the country – the team’s highest ranking in a quarter of a century.

The event started with players and coaches riding in a parade of mini floats from Brown Field to the Berger Family Lawn, where some of the team captains took the stage and reflected on the season.

The players were recognized for working through the obstacles that led them up to this historic season and this special day — namely playing during the pandemic and then through the aftermath of Hurricane Ida last season — challenges which made the Cotton Bowl victory that much sweeter.

But it was the anticipation and excitement of the Cotton Bowl that will stick in the memory bank of all Tulanians.

“I remember going down to the field with about five minutes to go, and I looked into the eyes of the Tulane players, and I said, ‘We’re going to win this.’ You could see the commitment, the hard work, the dedication of these players,” President Michael Fitts told the crowd.

“Some people are asking what the motivation was going up to the Cotton Bowl: It was really to exact revenge on USC for that 1932 game. Our guys were talking about that ’32 game all week while we were preparing,” said Head Football Coach Willie Fritz, in reference to the 1932 Rose Bowl, in which the USC Trojans defeated the Tulane Green Wave. “We’re so excited to have the opportunity to get those guys back.”

Fritz also graciously thanked the support staff for their hard work, as well as the thousands of fans who packed AT&T Stadium for the Cotton Bowl, dubbing it “Yulman, Texas.”

Fritz, who said the game still gives him goosebumps weeks later, led the team in a chant and even had the players recreate the game-winning touchdown pass between quarterback Michael Pratt and tight end Alex Bauman, so “there's gonna be no doubt” about the catch.

The celebration continued on Berger Family Lawn with kids’ activities, food trucks and giveaways for the Green Wave faithful. 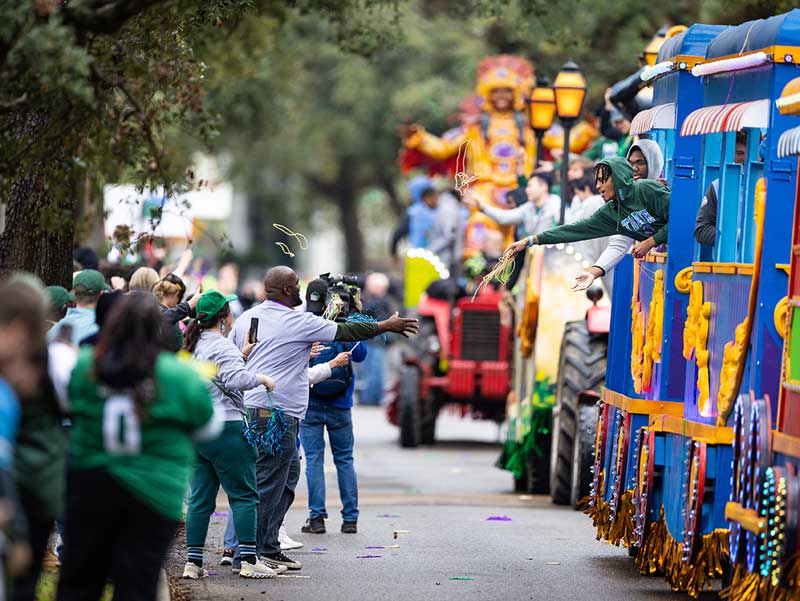 The football team parades through the uptown campus on colorful floats. , Fans cheer for the team as the floats pass by. , President Fitts (far right) addresses the crowd, congratulating the Green Wave on its historic season and thanking fans for the support., Fans pose with a cutout of Coach Fritz holding the Cotton Bowl trophy.